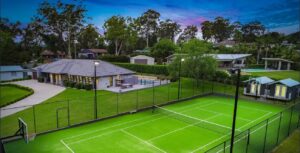 When Marie bought a Melwood cubby house for each of her granddaughters, it wasn’t just a gift but also a life lesson she was hoping to impart.

Kristie, the mother of the two girls, recounts being at the Neutral Bay display centre with her mum.

“She said one of them would be great, and then we realised the girls were at different stages, so we decided two would be ideal,” Kristie explained. 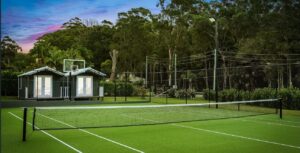 Holding Court: A Melwood Porch Design 12, and make it a double!

Marie chose the Porch Design 12 in board and batten with double doors and panoramic windows.

“We wanted the whole thing to fit in. The bottom wall of the tennis court was the same colour, so it looked like it wasn’t an afterthought.”

McKenzie and Tara, then aged 12 and 9, were also involved in the planning and fit-out.

“They both got a big piece of paper, and they drew what they wanted. They knew the dimensions based on Melwood’s drawings.”

“They had to go through all the colours, what furniture they wanted, and the budget for it.” 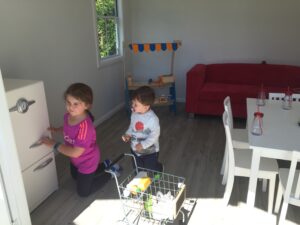 Installed to lock-up stage, the Melwood cubbies were ready for fit-out, paint, and furnishing. Pic supplied by Kristie

And, of course, Marie was there to see the project through.

For Kristie, it was all about old fashioned play.

“We grew up in a similar house where there was space to have our independence but still be safe and secure.”

“I’m not a big believer in going to your room. You need a bit of creative space.” 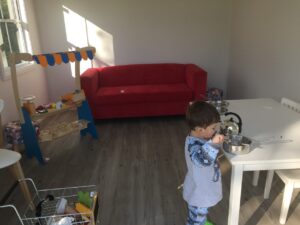 Getting back to basics, outdoor play for kids at home with a Melwood cubby house. Pic supplied by Kristie

The girls also had another sibling join in on the fun. Their brother, Josh, aged two.

“The little fella would play with Tara, the middle child. They would play younger games, tea parties with a pretend fridge, and a pretend oven.”

“McKenzie, who was older, had the real fridge!” 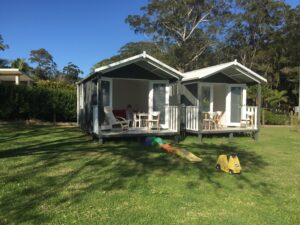 Porch Design 12 in board and batten with double doors. Painting arranged by Kristie and the kids

During school holidays, weekends, and even after school, these Melwood garden rooms proved ideal.

“It was amazing; the kids would clock up 20,000 steps going back and forth to the house without even noticing. Nowadays, most kids are on devices.”

The cabanas also ticked the box for convenience and peace of mind.

“We had walkie talkies so they would talk to each other. I had one, so if I was in the house or the yard, they could talk to me.”

Soon, it was fun for all. Kristie’s friends and their children also loved the outdoor playrooms.

“Whenever we would say to our friends, ‘let’s go the park, let’s catch up’, they would say ‘we’ll come to you.'”

And while the property has since sold, the memory of the cubby houses remains strong.

“It definitely added to the property. It made it so much more resort-like where you could stay at home, but you didn’t feel like you were locked in.”

“It’s something the kids will always remember.”

Inspired? Here’s how to get your own garden room

A custom-made garden room is the perfect starting point to creating more space for your family.

Adding a Melwood to your property is quicker & easier than most people realise. We’re ready to show you just how easy it is.

Already downloaded the brochure? Click here to schedule a call with our team so we can help you further.

Garden rooms that give you more space